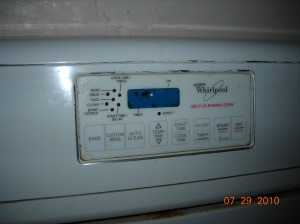 The dark spots in that digital clock aren’t grease.  They’re cockroaches.  I have no idea how they got in there, but when I found them, four out five of them were dead and the other one looked sick.  My tenants had moved out and left me with hundreds of roaches, crawling all over the walls and floors, in broad daylight, no less!  They were even swarming all over the inside of the refrigerator.  (Sturdy little devils!)  I’d been in the apartment a month earlier, and things were okay.  Evidently, the relationship between the tenants went south and the condition of the apartment followed suit.

The following is an excerpt from my book, The Landlord Chronicles, which has recently been released:

“A cockroach can live nine days without its head before it starves to death.  Sturdy little devils is an understatement!  Cockroaches have been around for literally thousands of years, and chances are good they’ll never show up on the endangered species list.  These bugs have evolved into one of the most enduring pests you’ll ever encounter.  Researchers come up with great new products to eliminate them, and the roaches’ response is to evolve their way out of it.

I’d used the spray cans you set off in the middle of the room before, to no avail…then one day, I passed a pest control business that had a sign in the window, advertising their willingness to sell to the public.  I did a U-turn and checked it out.  Minutes later, I walked out with three syringes of Max Force™, which is a bait gel made by Bayer AG (1-800-331-2867).  This is a truly amazing product, and I’ve been using it for several years.  It’s very easy to use; you apply a thin line of the gel along the inside edge of a cabinet, or behind the stove or refrigerator, or along the baseboard, wherever you’ve seen roach activity.  I’ve actually watched them come right up to the gel and sample it.  They love the taste, they invite their friends and family to the free buffet behind the stove, and when I return the next day, the kitchen floor is a mass grave.  It’s a beautiful thing.  Bad infestations have been totally wiped out in a matter of days with this stuff.

Hopefully, you’ll locate a pest control company that’s willing to sell directly to you; if this isn’t a common practice of theirs, perhaps you can persuade them by saying you have lots of rentals and that you’ll use their services/products for every extermination need.  Buying all my extermination weapons from this company has saved me hundreds of dollars over the years.”

So in this situation, I chose not to stay and work amongst this large community of cockroaches.  I mean, I can put up with a lot, but I don’t like to work alongside roaches.  I applied Max Force under the stove and refrigerator, under the sinks and inside the cabinets, and along the baseboards in all of the rooms.  When I returned a couple days later, I swept up the dead bugs and began the cleanup of the apartment.  Within a few days, the infestation was taken care of.

And I began my search for a better tenant!