Gun violence is always an issue in the inner city.  It doesn’t matter where you’re landlording, be it Boston, LA, Chicago or Indianapolis.  Having been born and raised in Gary, IN, I’m comfortable in neighborhoods filled with families of various racial/ethnic/socioeconomic backgrounds.  However, the inner city areas are often riddled with gang activity and drug dealers, and gun crimes are common within these groups.

Although I’ve been threatened by a few tenants who were in the process of being evicted, I’m a non-aggressive, laid back person and have never been fearful about visiting and working in my 29 units.  Friends and family have given me pepper spray throughout the years, and it sits in my glove compartment.  They’ve suggested getting a gun for self-protection, and after I saw one of my rentals on the evening news (my tenant had a psychotic break, was brandishing a machete, his fiancee called 911, and he ended up being shot by the police in the ensuing drama) I finally decided to ask a few policemen for their input.

I asked three different cops who all work in my rental neighborhood.  They wanted to know the addresses of my rentals; they were impressed with a few of the locations and disturbed with others.  All three came up with the same conclusion…

“Barb, you’ve been working down here for 15 years.  People know who you are, they know your car, and they know you work alone most of the time.  And, they assume you have money on you, even if you don’t.  If a crackhead breaks into one of your rentals and attacks you, what are you going to do?  Ask him nicely to go away?  You’re an excellent candidate for a gun.  And you need to carry it on you at all times.”

So, I broke down and got my permit to carry, which wasn’t difficult.  I had to go to my county Sherriff’s office and fill out paperwork, and that was it.  The permit cost me $70 and arrived in the mail a couple months later. 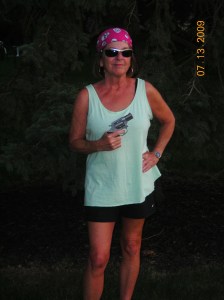 The policemen had told me where a reputable gun shop was, and I’m now the owner of a 38 special.  I’ve been to a shooting range and know how to use it, and I carry it with me when I’m working.  So now I’m a pistol-packin’ mama.  I took this picture in jest and sent it to my family — some were amused and some were downright frightened — but I do understand the very serious responsibility behind owning this weapon.

It’s an overwhelming responsibility to be carrying such a powerful weapon, and I pray I”ll never have to use it.  But if my life is threatened, I know I’ll be able to protect myself and use it, and I’m okay with that.